G3 athlete Andy Traslin recently reset his watch. Over the last three years, he climbed and descended (by ski, bike or foot) one million vertical feet each season, much of which he did with his brother Mike. His short and very casual blog post about it only heightened our curiosity. Luckily we were able to pin him down to get his perspective on what drives him to spend so much time in the mountains. Even after such a long push, the three-time Canadian ski mountaineering champ doesn’t really show any signs of slowing down, although he might not check his watch quite as much.You and your brother have been quietly killing it in the mountains for years now. When did you decide to really ramp it up to nab 3 million in three years? Was there a specific moment or event that spurred you on?

When I got my first Suunto watch I realized I could keep track of my vert. I had heard Reudi Beglinger did that, and then I read Mark Weir did it on a mountain bike. And I was sure some Tour de France riders pulled it off. So I figured why not combine the two sports: my two favourite outdoor pursuits, one for each season.  There wasn’t really a specific moment to go for three million. For the first few years I was really into Rando racing, and I would log my vert, and I would get close to a million. So, one season I went for it and hit the mark. The following seasons I went steady day after day and kept the streak going. 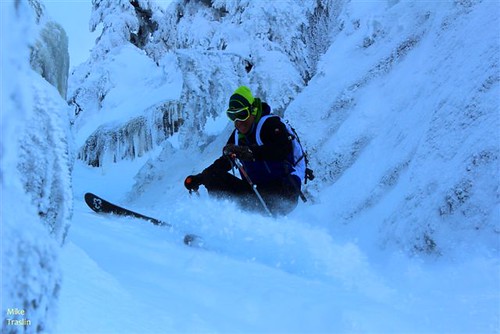 I think the biggest challenges have been staying motivated, not getting bored and staying healthy. Then there’s doing day-to-day tasks, and working and trying to save money, and having a life besides being outside. But that’s where I like to be.  The biggest rewards have been acquiring the fitness and skiing new lines, and winning a few races along the way. But of course those epic powder days where you can ski lap after lap and not get tired.Has if affected other aspects of your life? How?

As far as affecting other aspects of my life, this is what I like to do so I would be doing outdoor activities anyways. I won’t be getting rich in terms of money anytime soon, that’s for sure. But I consider it a form of my religion when I am climbing and skiing out in nature. I can clear my mind and be in the moment, and push through the hard times. It’s kind of a form meditation for me. It’s amazing to see some of the places you can get, that you can only achieve from self-powered movement. Like everything in life you must be willing to work hard to get the results. It seems like you and your brother Mike are good partners in the mountains? Do you feed off each other, or do the two of you need a break from one another after so many days?He’s someone I can count on to go on trips and get things done. I’ll put an idea out there and he will usually do it. Mike has also brought me along on some of the best trips I’ve ever been on.   However, when you hang out with someone too much, you get tired of all the little things, and sometimes you have to rely on a different form of communication, something I like to call the brother fight club. Just try not to give each other too many concussions.   It’s always good to go with other people and get different perspectives on terrain and ideas for ski lines. But I find one of the more complicated aspects of ski mountaineering is finding the right partners, trying to find the right balance of speed, fitness and level of risk. When the group gets bigger, and the big egos come into play, and even deciding when the right time is to ski something.    In the end, the mountains have the last say. We can do all the right things and accidents can still happen. But if we sit there on the couch talking, we might not get to ski anything. I’m looking for those moments of pure steep powder bliss that last in my memory forever. I also find the solo realm is the true sense of freedom to be in the moment and make my own decisions. I like the feeling of going with the flow, dialing in, and going at my pace and speed, and not having anyone to answer to, except the objective hazards of the environment. Everything seems sharper and alive. 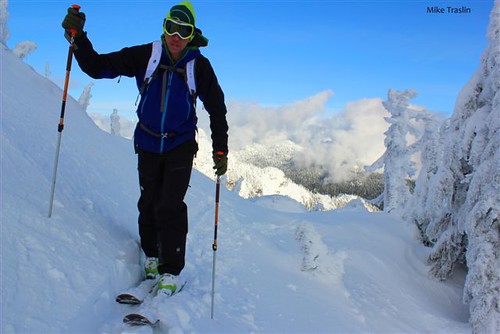 Andy Traslin .... photo Mike Traslin8 years ago ago by G3 Genuine Guide Gear.What has been your go-to G3 gear for all that climbing and skiing? What do you like about it?

The first year I was on the Tonic, a great all rounder. The second year I went a little heavier with the Manhattan, which was a little slower on the uphill, but way more fun on the downhill. Last year I was on the ZenOxides, a lighter ski for the big climbing days, but it skis well in the powder, and leaves you with more energy to spare.  I think the most important piece of gear has been the Alpinist skins. They’re durable and have excellent glide. Being light and having speed is where you’re going to make time, and having fast glide sure helps.The Onyx has been a key player with the easy step-in mode: quick transition to walk mode, and a solid downhill feel. 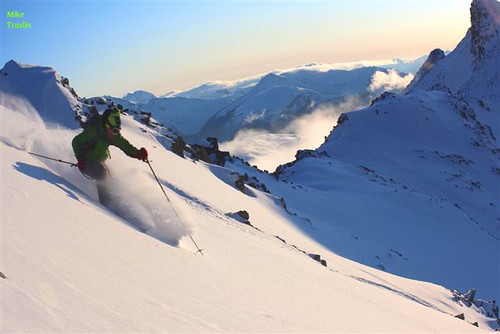 Andy Traslin .... photo Mike Traslin8 years ago ago by G3 Genuine Guide Gear.What now? Go for another One million next year, and the following? Or, do you have other plans?

I will set my watch once again to zero and see what happens, but I won’t be too concerned. In the end it’s just a number. The main thing is to be doing what I enjoy, have fun and stay safe. I know I am happiest when I’m skiing a steep line or riding down a fast and flowy, singletrack trail. I think the next stop would be to get back to expeditions and discovering and skiing other parts of the world. 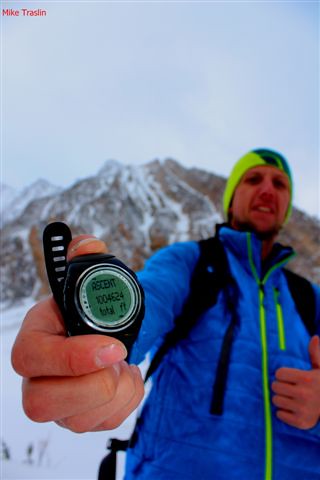