Never one to miss an opportunity, G3 Engineer Cam Shute wasn't going to fly all the way to Taiwan for business with out mixing it up with some recreation. Here's a post of what he found...

Long Dong (龍洞) which translates to Dragon’s Cave in English, is a phenomenal sandstone sea cliff climbing area only 35km (~1hr by car) Northeast of Taipei. With bomber rock and almost 600 routes to choose from I always try to squeak at least a day of climbing here when I am in Taiwan for work. I started searching for a partner using the internet, and came across a very handy Taiwan climbing facebook group where I luckily got introduced to Ryan Keenan. My local friend here Calvin offered to drive us, and boom we had a plan!

Despite it raining that morning in Taipei, Ryan was still keen to keep going until Mother Nature shut us down. We arrived to clearing skies and a bit of wind that was quickly drying the crags. Ryan suggested we start at the Golden Valley sector which has some phenomenal trad lines. We warmed up on "Fillet Show,” and were immediately interested by a steep arête littered with big holds. Ryan arrived at my belay, and immediately sent the line and managed a belay at an existing anchor above. He lowered, and I led the route on his gear….amazing! Since the route we did is a more logical extension of “Cunning Linguist” we called it “Cunning Stunt” which seemed to do it justice. 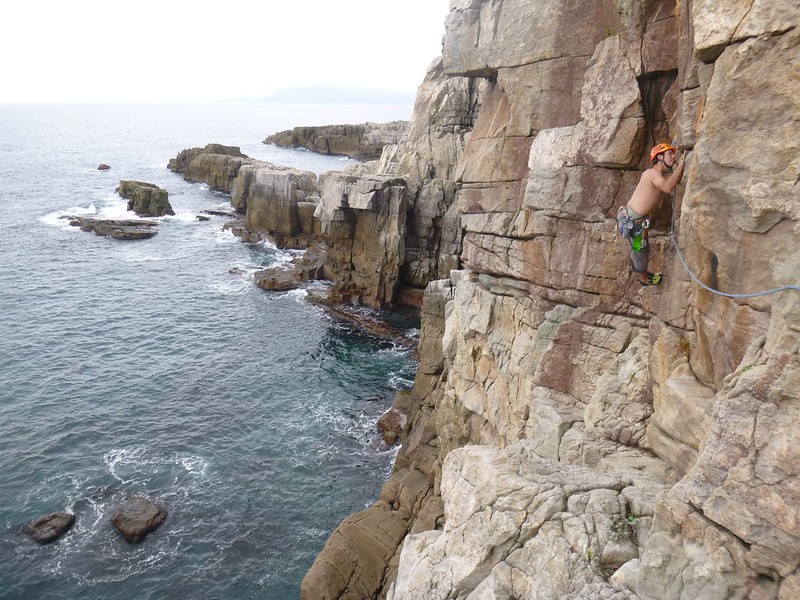 After climbing half dozen routes we were ready for a quick dip in the sea and a Taiwan beer to end our day. Reflecting on this crag, I can’t believe it’s not a more popular international destination for climbers. Taiwan is an amazing country with friendly people, great food, fascinating history and culture so if you have a chance you should put it on your bucket list.

Useful links for climbing in Taiwan

http://taiwanrocks.net/ - Overview of climbing in Taiwan