Whitewater Peak - close but no cigar

3:50 AM Saturday morning my alarm rings, but I'm already awake. I look forward to mornings like this where the nervous anticipation of the day to come makes the early start a breeze. Jeremy and Nelson picked me up on time and we headed towards Kaslo meeting up with Ned, Brian and Louis on the way. The plan for the day was to climb and hopefully ski from the summit of Whitewater peak in the goat range just north of Retallack. We were sledding by ~6:30, skinning by 7AM under splitter bluebird skies. Whitewater creek is a very enjoyable skin (albeit a bit long) up towards Whitewater peak (2768m) which is readily climbed by it's east ridge. 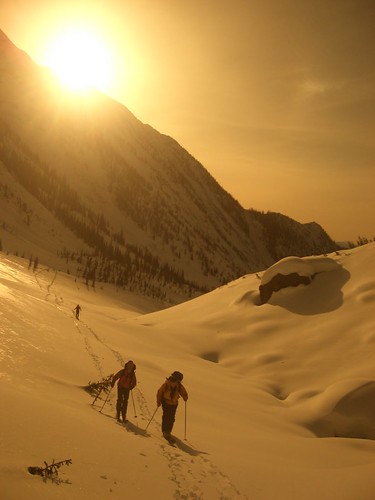 morning skinning10 years ago ago by G3 Genuine Guide Gear.

As the peak came into view we were awestruck by the aesthetic line that the east face presented ending in a diagonal couloir facing south. It's been a tricky winter up here for stability, but we were hopeful that the past week of sun had bonded the layers well and perhaps taken care of some of the sketchy surface hoar layers. 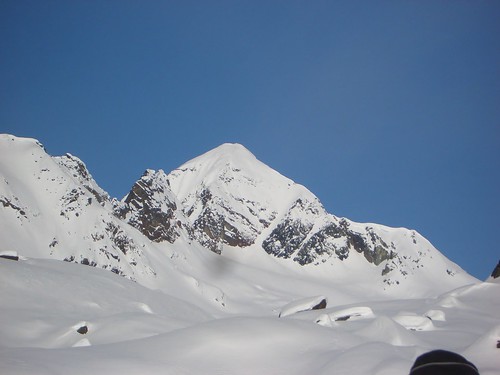 Whitewater peak10 years ago ago by G3 Genuine Guide Gear.

We had lunch at the col just at the start of the east ridge, and gazed around at the seemingly endless possiblities for good skiing in the area. 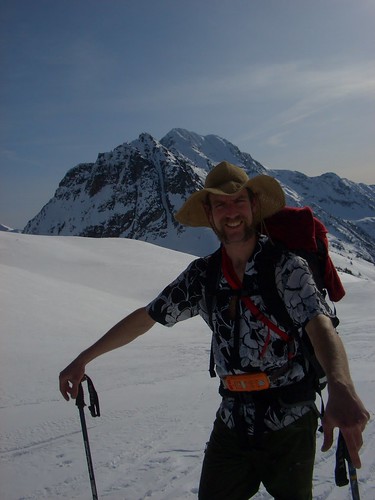 Brian10 years ago ago by G3 Genuine Guide Gear.

The goat range isn't all that well visited by skiers, and is most definitely one of the hidden gems for backcountry skiing close to Nelson BC. 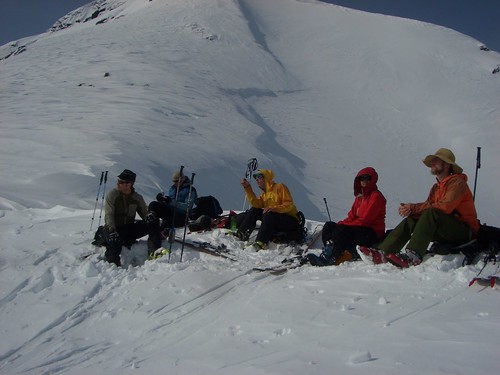 Boys at the col10 years ago ago by G3 Genuine Guide Gear.

From the col it's an easy skin to a bit of a bench, and then there is quite a steep step that proved to be rather challenging since we had to scramble up through sugar snow covering rock. Upward progress was definitely a chore as the leader basically had to carve out a trench with their knees and arms in order to move upwards at all. Once we arrived on the upper ridge we were blessed with a beautiful position and firm snow which made the bootpack relatively efficient. 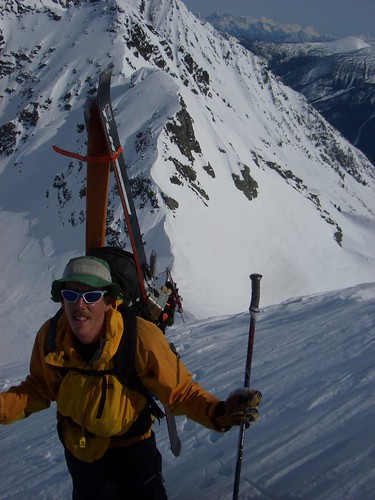 Ned10 years ago ago by G3 Genuine Guide Gear. 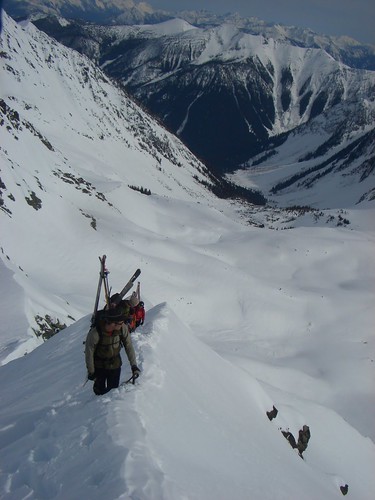 We reached a point about 75m below the summit where we had to work out onto the east face in order to avoid a cornice, and after taking about 20 steps out onto the face I felt a sudden a large settlement. Moving up a couple more steps I saw cracks in the snowpack, and we began to really question the stability. Digging a quick pit confirmed our worries finding a nasty surface hoar layer 30cm down, with another better bonded layer down 60cm. Another pit on a slightly more southerly exposure confirmed that stability was improved on that aspect, so we changed our plan and decended down the ridge to where we were able to access the diagonal couloir at the base of the face. 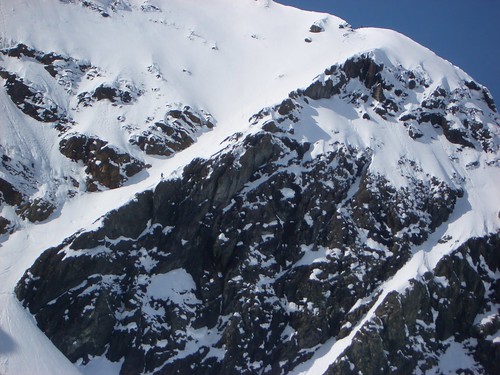 Nelson Rocha on the ramp10 years ago ago by G3 Genuine Guide Gear.

The couloir provided somewhat challenging snow to ski (crusty, variable with a heavy sluff), but it was such an aesthetic line no one minded much. The chute started mellow and steepened as it joined the debris cone at it's bottom. Happy with our decision to minimize our risk the group headed back down to the valley with the line on the east face clearly burned into memory....definitely one to come back for! 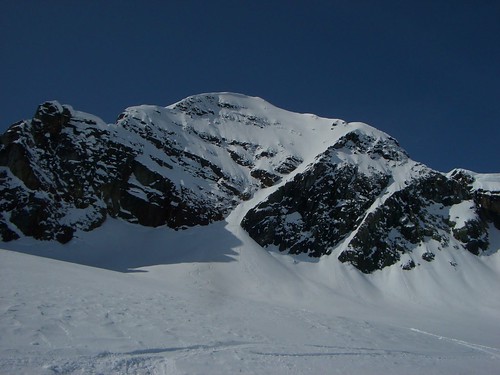 East face of Whitewater Peak10 years ago ago by G3 Genuine Guide Gear.