Mount Chamberlin—Skiing from the Highest Summit in the Alaskan Arctic Brooks Range, Arctic National Wildlife Refuge, Alaska Trip Report June 8-18, 2009 Joe Stock We didn’t go to Mount Chamberlin for great skiing. Every winter, minus fifty-degree winter temperatures turn the measly arctic snowpack into knee-deep depth hoar. When spring arrives, the snow becomes knee-deep isothermal slop and mosquitoes swarm in black clouds. We went to Chamberlin for adventure. Mount Chamberlin sits in the heart of the Arctic National Wildlife Refuge at the east end of the 550-mile long Brooks Range of northern Alaska. At 9,020 feet, Chamberlin is the highest peak in the Brooks Range and, despite Greenland, Chamberlin is the highest mountain in the Arctic. Mount Chamberlin had never been skied. In early June, Matt and I drove from Anchorage to Wrights Air Service in Fairbanks. We crammed our gear into a Helio Courier bush plane and flew two hours north to the Arctic Refuge. We had a pile of maps, four bear-proof canisters of food, skis, a twelve-gauge shotgun, a .44 handgun, a battery-powered electric fence, pepper spray, and like all proper Alaska trips, we had almost no information. Our pilot landed the Helio Courier on a gravel bar of the Hulahula River, spraying rocks and gravel that pinged off the wings. When the Helio’s drone faded away, we took stock of our situation. We were at 1,500 feet, 12 miles from the base of Chamberlin and on the opposite side the mountain from our plans. We also saw no snow. Over the next two days, Matt and I cowered under crippling packs to establish a high camp within striking distance of Chamberlin. As we hiked, we watched three grizzly’s run from our scent and we questioned our sanity to lug ski gear into dry mountains. At 5,000-feet we set up a high camp in the green tundra below the summit pyramid of Mount Chamberlin. Three days of snow and rain crushed our supplies and we returned to the Hulahula for more armaments. The next day we returned to 5,000 feet, hoping for cooperative weather to ski Chamberlin. On our seventh day, we left the micro tent at six in the morning, skinning up a dying glacier through clouds and mist. At 7,000 feet, we scrambled through snow-coated boulders and kicked steps up a 45-dergree snow face to a winding summit ridge of snow. A hundred feet below the summit and still unroped, my foot punched through the roof of a crevasse into a cavern of glittering crystals. We tied together with a five mm diameter rope, thirty feet apart and continued kicking steps up the twisting snow arête to the summit of the Brooks Range. Maybe we should have center-punched the Chamberlin Glacier; ripping turns between gapping crevasses, taking the proud line. But reality stayed with us. We knew that rescue was laughable in this lonely corner of Alaska, so we clicked into our skis and skied 40-degree snow-coated glacier ice along the glacier’s margin. Past the last crevasse, we carved hero corn for a few glorious turns until the snow deteriorated into isothermal slop. We struggled down through the erratic snow for the final 2,000 feet to our high camp. We’d been lucky to have any skiable snow. Matt and I camped for three more days at 5,000 feet, venturing into the midnight sun for skiing photos and into the daytime mist to document the Katak Glacier before its imminent death. We then slogged back out to Hulahula landing strip and waited for the Helio Courier. If you ran the calculations, you’d find skiing Mount Chamberlin to be contrived—we carried our skis and boots more than we wore them. But the question is: would we have gone to Chamberlin without skis? If we’d summitted Chamberlin’s without skis, then we’d have sworn and screamed, “WHY didn’t we bring our skis?!” We did bring skis, though, and they were so worth it. Skiing gave a reason for a crazy adventure. And those summit turns were world class. Joe’s Ski Gear: G3 Saint Skis, G3 Onyx bindings, Scarpa F1 Boots Saints rule the backcountry. They have the girth for all conditions—powder to ice—and their low weight make them ideal for long tours. Last year we used Saints for a 100-mile full length traverse of the Tordrillo Mountains. This year they kept my pack to a survivable weight on the 12-mile approach. I rigged my Saint skis with Onyx bindings for the ultimate in lightweight backcountry performance. I especially like the Onyx’s easy heel release for switching from downhill to tour mode. I also liked the easy flip up heel elevators. The Onyx bindings gave me the confidence I needed to ski the steep, icy summit slopes of Chamberlin and the releasability I needed for the knee-wrenching slop at lower elevations. Matt’s Ski Gear: G3 Saint Skis, G3 Targa Ascent Bindings, Scarpa T2X Boots This was Matt’s first time on free-pivot tele bindings and he’ll never go back. The Targa Ascent is the lightest and strongest free-pivot binding available. While I took GPS elevations of the Katak Glacier, Matt lapped a slope of perfect corn, continually raving about the ease of free-pivot bindings and the faultless dimensions of the Saints. Thanks for the incredible engineering G3! Special thanks to The Hans Saari Memorial Fund and Osprey Packs for making this trip possible. 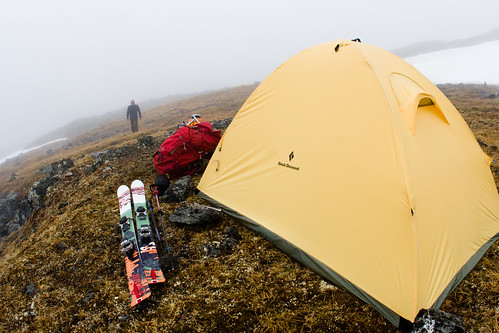 View on Flickr11 years ago ago by G3 Genuine Guide Gear. 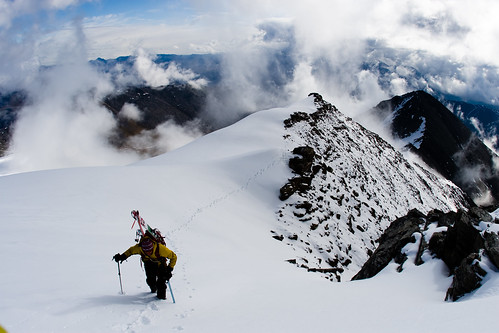