The goods keep on coming

Think ski season is over? Think again—check out this vid from Andy Traslin skiing with his brother Mike a couple weeks back on Mt. Philistine's North Couloir in the vicinity of Pemberton, B.C. (our back door, we'd like to add). Here's the tale:

The trip started with the usual off-roading on some random logging road in Pemberton. Alex had to spot me on the drive, because I was driving a 91 Honda Civic with about a half-inch of travel. Many a car has been ruined on the same drive.Maddy assured me it would be OK: ”They drive roads like this in cars like yours all the time in Costa Rica."

I was stoked to be going into a new area , but I was not stoked on the 40-degree side hilling approach. I thought I was ski-touring on the dark side of Mt. Seymour, notorious for steep mountain biking on the North Shore. 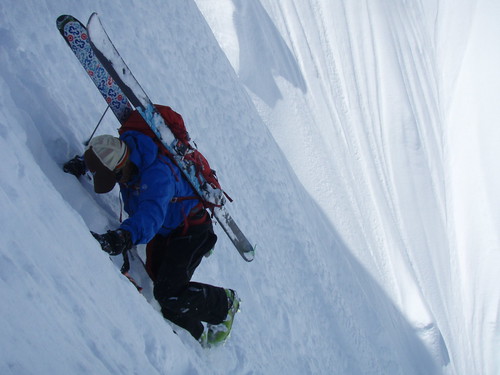 We made it to the North Creek Cabin, but I thought I was going to the Pebble Creek Cabin. Well, at least I knew the name of the peak. Mike couldn't remember the peak name as we were booting up it.

Aside from the looming overhead cornices on the climb, and the swimming uphill travel at the top of the couloir, the 3000-foot ski descent was epic, especially the top, which was knee-deep powder. I was on the new G3 Zen Oxide, a perfect ski for the spring season. Super light for uphill travel, a bit of early rise in the tip for slaying the pow on the down. But up is where you spend most of the time backcountry skiing, so it's nice that this 105-underfoot board keeps it on the light side. Mike was envious of me on the uphill as I pulled away, but he had the benefit of the downhill with the Tonic. A little heavier but more stable on the downhill, and he was willing to compromise on that during the slog in.

But what matters in the end is we still got to ski the same line.